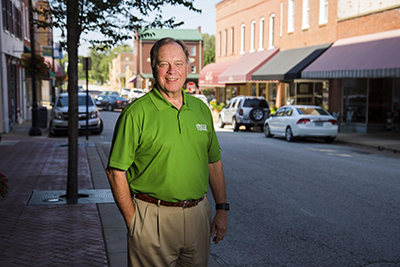 Arnie Sallaberry moved to Missouri from the West Coast in 1986 when Clemco Industries Corp., a manufacturer of abrasive blasting and surface finishing equipment, bought a Washington-based manufacturer and made Washington, Missouri, its North American operating headquarters.
Sallaberry immediately set about making himself a part of the Washington community, which meant, of course, doing business with the Bank of Washington. Sallaberry has been with Clemco for 38 years and in 1999 was named president of the company, which has 150 employees in Washington and another 100 worldwide. Clemco is projecting revenue of about $39 million for North and South America this year and about $27 million in revenue from its operations overseas.
“My family and I have been customers at the bank pretty much since we moved here in ‘86, and Clemco has been a customer almost that long,” said Sallaberry, 70. “My association with the Bank of Washington has been long and rewarding.”
That association moved to another level in 2000, when L.B. Eckelkamp, chairman of the Eckelkamp-family-owned Bank of Washington, called Sallaberry and asked if he could stop by for a visit.
“L.B. is a very busy guy. He doesn’t just come over for a pop visit,” Sallaberry said. “I just couldn’t imagine what the reason could be.”
The reason was to ask Sallaberry to serve on the Bank of Washington’s board. Sallaberry has since spent 16 years on the board — serving during a time of significant change in the banking industry.
For example, the advent of online banking has changed the way customers interact with banks, taking business out of the bank lobby and into people’s homes and businesses, as well as onto their mobile devices.
“Fifteen years ago, we were going to the bank every day to deposit the checks that came in, but people don’t see the four walls of the inside of the bank anymore,” Sallaberry said. “With the rapid development of online banking and mobile banking, it’s really spurred the creation of new products and services geared toward how customers want to interact with banks.”
As a member of the Bank of Washington’s audit committee, Sallaberry has been involved in keeping a close watch on the security risks that can come along with increased online and mobile services.
“The auditing function these days is not just about the financials,” Sallaberry said. “It touches virtually every function at the bank, with a heavy focus these days on IT and cybersecurity.”
Sallaberry’s tenure on the Bank of Washington’s board also coincided with the financial crisis that began eight years ago. Earlier this year, the Federal Deposit Insurance Corp. (FDIC) lifted an order issued in 2012 that required the Bank of Washington to improve its management and lending procedures. The bank, which had $599 million in assets as of Dec. 31, has improved its performance significantly in the past four years — posting a profit of $883,000 in 2015 compared with an $8.7 million loss in 2012 and improving its return on average assets to 0.15 percent last year, compared with a negative 1.06 in 2012.
“Of course it was a very challenging time not only for Bank of Washington but for all banks,” Sallaberry said of the financial crisis. “We are and have always been a community bank, and our customers are by and large our friends and neighbors and people we run into on the street every day. Because of those relationships, we may have stuck with our customers a little longer than we should have back in those days.
“It took several years for us to work through those issues, but now we are out on the other side and making great strides,” he said.
Sallaberry said that what he’s enjoyed most about serving on the bank’s board has been the opportunity it has given him to connect with the bank’s customers — whether at a bank-sponsored dinner or a community event or just as part of day-to-day business in Washington.
“Arnie’s business philosophy has always emphasized the importance of listening to your employees, your customers, your vendors and your community, and aligning those voices with your business deliverables and strategy,” said Eckelkamp, the bank’s chairman. “He has most influenced the Bank of Washington through his application of this philosophy.”
Eckelkamp also said Sallaberry’s insight into the financial needs of the industries in the bank’s region has been invaluable.
“With his background of leadership at Clemco and his involvement with the Washington 353 Industrial Corporation, Arnie has provided our bank with business perspectives unique to the industrial manufacturing industry,” Eckelkamp said. “Also, as a former president of the Chamber of Commerce and now as a Washington Chamber Ambassador, and a volunteer for so many organizations, he is always out in the community listening to our customers and helping us align our products with our customers’ wants and needs.”
In addition to serving on the bank’s board, Sallaberry is a member of the Washington 353 Redevelopment Corp., past secretary of the Washington Industrial Development Authority, current member and past president of the Rotary Club of Washington, a former member of the Washington Investing in Great Schools Foundation, past president of the Washington Area Chamber of Commerce and current Washington Area Chamber ambassador.
He and his wife, Harriet, have three children and six grandchildren, with another grandchild on the way.

Over 130 Years of History in the Making.

Learn more about Identity Shield and the benefits of signing up.

We are proud to offer savings programs for kids ranging in ages from newborns to 8th graders!

No Down Payment? No Problem.

With our USDA home loans you can finance 100% of the loan!