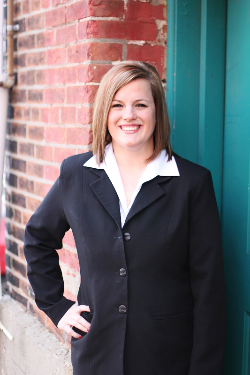 Washington, MO – Bank of Washington Chairman of the Board and Chief Executive Officer L. B. Eckelkamp, Jr. recently announced the promotion of Jess Bowen to Retail Branch Director.

“I am proud to be employed by a company that values their employees and the customers they serve,” stated Bowen. “This shows in the Bank of Washington’s commitment to be actively involved in the community, the opportunity they provide their employees to know customers outside of the bank and the overall personalized service they focus on providing.”

Bowen graduated from East Central College where she obtained an Associate of Applied Science degree in business management, and has also attended the Center for Financial Training. She has volunteered as the Team Captain for the Bank of Washington’s Relay for Life team, and also through a variety of organizations within the bank and the community. Additionally, she is a member of First Christian Church of Union and of the Missouri Bankers Association – Young Bankers Division. She and her husband Jason reside in Union.

The Bank of Washington is the oldest and largest community bank in Franklin County, serving the community for over 135 years, and offering banking seven days a week at their branch located inside Schnucks in Washington. In addition to six convenient branch facilities located throughout Washington, Gray Summit and Villa Ridge, the Bank of Washington also provides online banking, mobile banking and 14 ATMs throughout Washington, Marthasville, New Haven, Villa Ridge and Gray Summit.