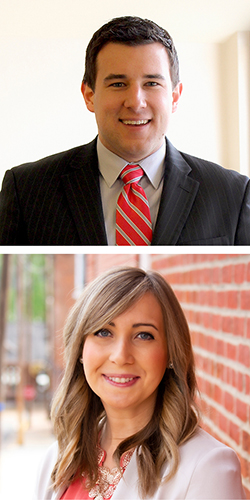 January 11, 2021
JEFFERSON CITY, Mo. — Chris Eckelkamp, Assistant Vice President of Commercial Lending, and Danielle Unnerstall, Director of Digital Strategy and Marketing, with Bank of Washington, recently graduated from the Missouri Bankers Association’s Banking Leadership Missouri program.
“We are very proud of Danielle and Chris for their desire to continue their banking education and for their commitment to community banking,” stated Bank of Washington President, Louis B. “Buzz” Eckelkamp, III. “They are both exceptional leaders and represent all that we try to be here at the Bank of Washington – focused on, committed to, and concerned about our customers and their financial needs and well-being.”
Eckelkamp and Unnerstall were among 20 bankers from throughout Missouri who completed MBA’s 18-month leadership development program designed to actively enhance the leadership, organizational and performance skills of highly motivated mid- to upper-level bankers. Courses focused on emerging bank issues, governmental relations, ethics, leadership styles, workplace culture and communications. Banking Leadership Missouri establishes a network of future bank leaders who can respond to local and national issues affecting the banking industry and their communities.
“Through Banking Leadership Missouri, Chris and Danielle both developed a deeper understanding of the issues affecting the banking industry,” said Max Cook, MBA president and CEO. “They are leaders in their community and are among the next leaders at the Bank of Washington and our association.”
Chris Eckelkamp
Eckelkamp joined the Bank of Washington in 2012 as a credit analyst and was promoted to Commercial Lender in 2014 and Assistant Vice President of Commercial Lending in 2017. He is a graduate of St. Francis Borgia Regional High School and earned his Bachelor of Science degree in Business Administration with a specialization in Finance from Southeast Missouri State University. In 2016, he graduated from the Missouri Banker's Association Advanced School of Lending and is a member of the Missouri Bankers Association – Young Bankers Leadership.

Eckelkamp is heavily involved in the community through the Washington Town and Country Fair, YMCA as a mentor for youth in our community, Youth Sports and Downtown Washington. He is also a member of the Knights of Columbus, St. Francis Borgia Regional High School Athletic Association, and St. Louis Sigma Chi Alumni Association. He is a 2017 recipient of the Washington Area Chamber of Commerce Young Professional Award. Eckelkamp and his wife, Kayla, reside in Washington with their two children, Leo and Hallie.
Danielle Unnerstall
Unnerstall joined the bank in 2011 as the Director of Marketing, was promoted to Director of Marketing and Public Relations Officer in 2013 and promoted to Director of Digital Strategy and Marketing in 2020. She is a St. Francis Borgia Regional High School alum and graduated with honors from Missouri State University, Springfield, where she earned a Bachelor of Science degree in Marketing with an emphasis in Advertising and Promotions, and a Minor in Design. She is a 2014 recipient of the Washington Area Chamber of Commerce Outstanding Young Professional Award and a member of the Missouri Bankers Association – Young Bankers Leadership.

Unnerstall volunteers as a member of the St. Francis Borgia Grade School Marketing Committee, Board of Education and Trivia Night Committee; serves as a member of the Washington Town and Country Fair Queen Committee; volunteers with Meals on Wheels; assisted in the development of the Leadership Academy of Washington; and chaired the St. Francis Borgia Parish Fall Festival with her husband in 2019. Unnerstall is a member of St. Francis Borgia Parish and resides in Washington with her husband, Spencer, and their two children, Charlie and Auggie.
The Missouri Bankers Association is a statewide trade and professional organization in Jefferson City that represents the interests of more than 245 banks and savings and loans in Missouri. MBA serves as the principal advocate for the Missouri banking community and provides educational opportunities, products and services that assist bankers with enhancing their banking operations. For more information, visit mobankers.com. Follow MBA on Twitter at @mobankers.com.
The Bank of Washington is the oldest and largest community bank in Franklin County, serving the community for more than 140 years. The bank has six branch locations and, since COVID, has extended hours at its Fifth Street branch and Fourteenth Street branch to be open on weeknights until 7 p.m., and extended hours on Saturdays and Sundays as well. The investments that the Bank of Washington makes in the local community ranks them as one of the largest commercial lenders in the St. Louis area and they have been consistently voted the No. 1 bank and mortgage lender in the Washington Missourian Readers’ Choice Awards.
< Back to Newsworthy

Need a business loan? Small Business Lending is not a “movement” for us; it is a passion for us.