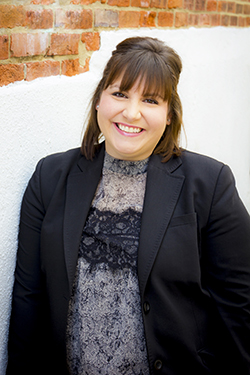 Kristen Spaunhorst, 35, works at the Bank of Washington as product development coordinator. She has been with the bank 14 years.

"Kristen began with the Bank of Washington on the retail front line, became a branch manager, then accepted a new position in 2011 as the product development coordinator," said Buzz Eckelkamp, bank president, who nominated Spaunhorst for the Outstanding Young Professional Award.

In her new position, Eckelkamp said Spaunhorst has taken a leadership role.

"She has established and implemented entirely new processes and procedures, from generating project charters outlining strategy, project goals and deliverables, to ensuring compliance, risk assessments and vendor due diligence are completed effectively," he said.

"Kristen has become the glue of new retail product development within the bank, and many of her processes and procedures have been applied to additional areas across the organization," he added.

Eckelkamp said Spaunhorst's recovery from Guillain-Barre syndrome this past year has been remarkable and inspiring.

"Through medication and intensive rehabilitation, unbelievable amounts of determination and strong will, and through faith, Kristen was able to fight back," he said. "Kristen chose to return within a few weeks of being released from the hospital, choosing to use work as part of her rehabilitation."

Since her return, Eckelkamp said she has been stronger and more motivated than ever.

"Her dedication to her health, to her family and to the Bank of Washington, is admirable and something our bank family is beyond of, and goes beyond being an outstanding young professional," he said.

Eckelkamp said Spaunhorst has volunteered for "countless hours" behind the scenes at the Bank of Washington for the American Heart Association and in preparation for local events in the community.

Spaunhorst is a member of St. Gertrude Parish, the Missouri Young Bankers Association, Missouri Fiserv User Group, serving as secretary, and the GBS/CIDP International Foundation, working as a liaison to help victims and families.

Learn more about Identity Shield and the benefits of signing up.

We are proud to offer savings programs for kids ranging in ages from newborns to 8th graders!