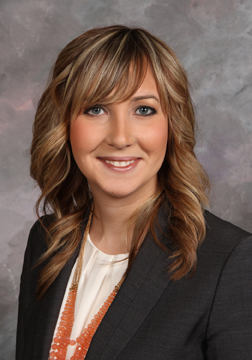 Washington, MO - Danielle Unnerstall, 29, is the officer/director of marketing with the Bank of Washington.

She was nominated for the Young Professionals award by Jay Nowak, vice president of the bank.

Unnerstall joined the Bank of Washington in May 2011 as marketing director, and was promoted to an officer with the bank in 2013.

She is a St. Francis Borgia Regional High School alumna and graduated with honors from Missouri State University, Springfield, where she earned a Bachelor of Science degree in marketing with an emphasis in advertising and promotions, and a minor in design. She currently is enrolled in the American Bankers Association School of Bank Marketing and Management.

At the Bank of Washington, Unnerstall has been instrumental in helping the bank take its customers service and strategic marketing to a new level and recently led the website redesign.

The project was considered a "major success," Nowak said, adding that it took nearly a year of planning and preparation.

"Danielle's background in graphic design has served well in the redesigning of all banking brochures, calendars and marketing materials, playing to the strength of Bank of Washington's brand identity," Nowak said.

Unnerstall has led many successful advertising and marketing campaigns including Kids Go Green, an account specifically designed for youth.

Children can earn funds by completing tasks such as learning more about finances or volunteering their time in the community.

She also created a marketing campaign titled "12 Reasons to Try Online Banking and Bill Pay in 2012."

Unnerstall's energy and desire to succeed have created roles for her to assist in other areas of the bank, including the BOW Technology Committee, Account Product Restructure, Lending Campaigns and Financial Literacy Campaign.

"Danielle displays a knowledge and presence that is rare for someone of her age," Nowak said. "Danielle is typically one of the first to volunteer to take on a new project or task and more often than not is targeted for a leadership position."

Nowak said Unnerstall's ability to be candid and honest while working in team settings is a testament to her integrity and team first attitude.

Unnerstall serves on several committees at the bank as well as in the community. She has been a member of the Washington Town and Country Fair Queen committee; Washington's 175th anniversary committee; Bank of Washington Heartwalk committee; Our Lady of Lourdes marketing committee; and the Washington Area Chamber of Commerce's Young Professionals group.

Unnerstall, who recently became a mother, has successfully balanced a professional career along with a healthy and happy family life.

She and her husband, Spencer, reside in Washington. The couple has one son, Charlie, who is 4 months old.

Deposit Checks with Our App.

Over 130 Years of History in the Making.

Great benefits such as Online and Mobile Banking are available!

Students learn about the importance of saving for the future and helping our community!